Posted by amandralynn on April 15, 2013
Posted in: Table of Contents. 19 Comments 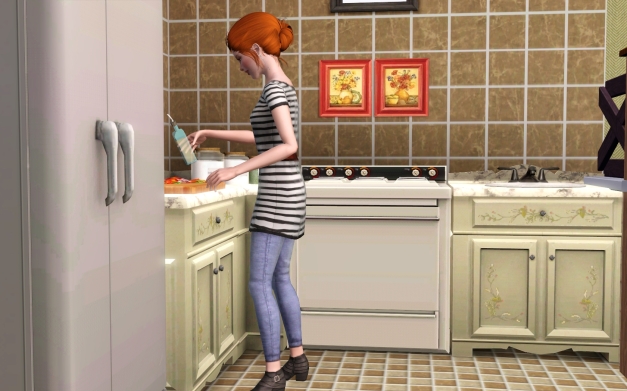 Autum flew by on Legacy Island.  Lucy couldn’t believe how happy she was with Sam.  They spent all there time together.   Either she was at his house, or he at hers.

One cool autum morning Lucy was busy in the kitchen making breakfast.  She whistled with domestic bliss as she worked.  She loved to cook for Sam.  He couldn’t boil water, so he was happy at anything Lucy layed in front of him.

“You know. I’ve been thinking Lucy.” Sam began across the table.  “We’ve been living together for awhile now.  I thought maybe it was time for us to move in together.  We could rent out my place, give us some extra income, maybe save up for something bigger in the future.”

Lucy, having stood up to begin cleaning the breakfast dishes squealed with joy and dropped the plate she was holding on the ground! It shattered, but she didn’t notice or care!

She jumped into his arms in their tiny kitchen, almost knocking him over into the counters.  She couldn’t imagine being any happier then she was at this moment. 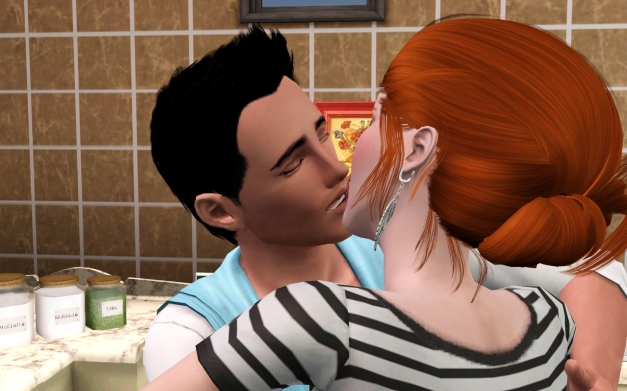 “Lets do it!” Lucy agreed.  They pretty much lived together already, they might as well make it official.   Sam leaned in and gazed into Lucy’s eyes.  She loved how he made her feel.

Lucy and Sam acted like newlyweds.  Spending most of their time at home in the bedroom.  She simply couldn’t get enough of him.  Even when she was at work she could feel his hands on her, and couldn’t wait to get home.  She was insatiable.

One morning she woke up and felt dizzy and sick to her stomach.  It was flu season and she had been logging a lot of hours in the hospital.  It seemed every day someone was calling in sick, leaving them short handed at work.  She had been running herself ragged, and it was no wonder she was coming down with it too! 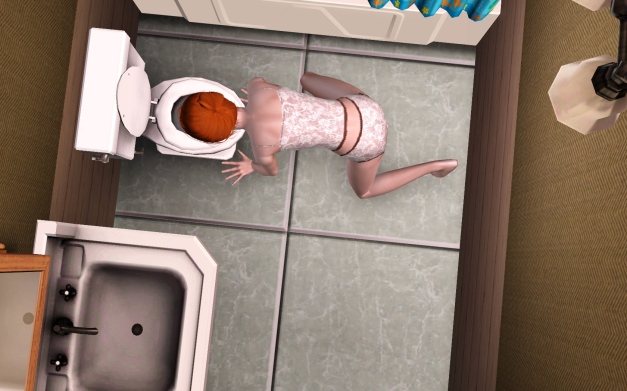 She barely made it to the bathroom before she heaved her stomach contents into the toilet. She stood up on shaky legs and went to the phone to call in to work.  Lucy had a fantastic work ethic and hated too call in and leave them short staffed, but as she tried to stand she felt like she could fall and hit the floor tiles, and knew she wouldn’t make it. 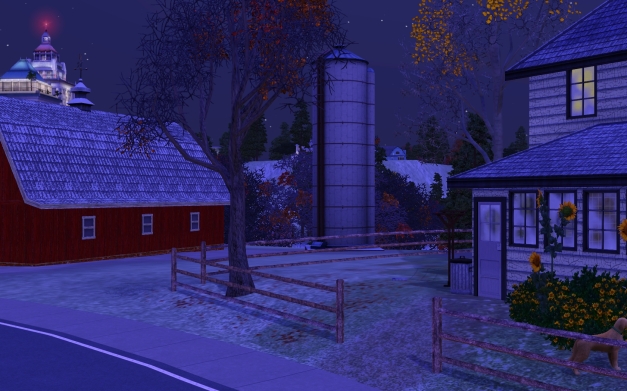 They had there first frost on legacy island, winter was coming around the bend fast.  Lucy was still having problems with the stomach flu that was going around.

Lucy was working out with Sam one night and had to run outside and throw up into the grass.  She was definitly not shaking this flu like she thought she should have been.  She was going to make a doctors appointment tomorrow if she wasn’t feeling better by morning.

“Lets take a walk in the park.” Sam said a few days later.  Lucy had been feeling like her usual self.  I guess it really was the flu. She thought to herself.

A walk in the park sounded lovely.  It was a beautiful fall day, but cold.  The sky was a bright blue, cloudless, but so cold you could see your own breath.

Despite the cold Sam was determinded to make it a romantic outing.  Of having complained of the cold Sam took it upon himself to hold Lucy just a little tighter too keep her warm.

They took there picture in front a fountain… 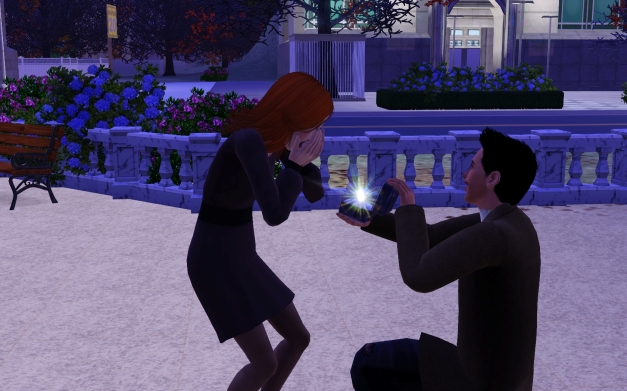 Then he gave Lucy the shock of her life by getting down on one knee and pulling out an engagement ring out of his pocket, presenting it to Lucy.  He looked so nervous that it made Lucy smile.  He had nothing to be nervous about!

“Yes!” Lucy yelled, before Sam could even pop the question. 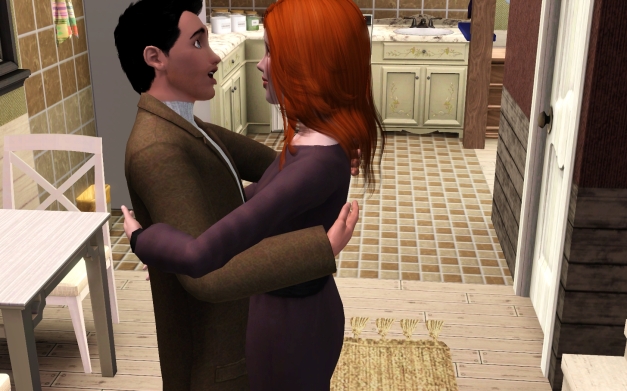 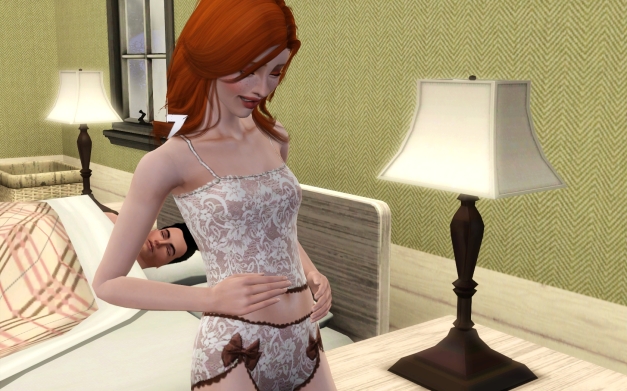 It was days later that Lucy was laying in bed and sat up with a start.  She had missed her period.

I guess that explains the flu. Lucy thought.  She hadn’t planned on getting pregnant this soon. They weren’t even married yet! But she was so happy she could burst. She couldn’t wait to tell Sam the happy news!

Not wanting to waddle down the isle, Lucy put her wedding plans into hyper drive.  Sam, still in shock over the pregnancy, was happy to give Lucy the dream wedding she had always wanted.

She was a little bit of a bridezilla, dealing with pregnancy hormones, and the added stress of planning a wedding in such a short time frame.  Sam didnt offer any input, as it was Lucy’s show.  All he needed to do was show up wearing a tux.

Lucy found a charming little church out in the country.  It was perfect. 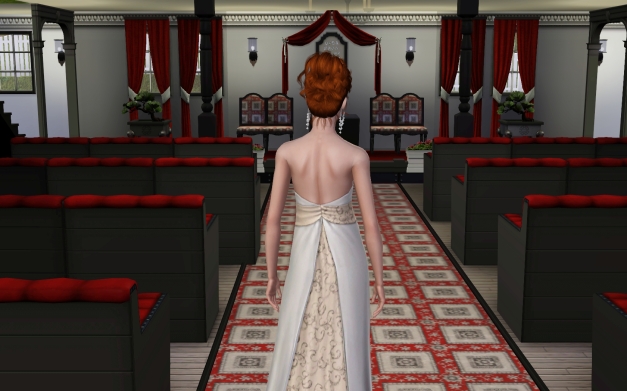 The day of the wedding Lucy was nervous.  Her palms were sweaty and her stomach fluttered from nerves.  Even the baby seemed to be excited.

But once she was up on the alter and standing beside Sam, the nerves melted away like butter on toast.  She didn’t notice their friends and co-workers in the audience.  She was 100% focused on Sam.

It was time to recite their vows. They both had agreed to write there own.

“Lucy.” Sam said with emotion.  “I knew I was in love with you the day I met you.  There was just something about you.  You had such a beautiful smile that even then I couldn’t imagine living a day without seeing it.”

“Sam…” Lucy said feeling the tears start to leak from her eyes.  “Growing up, all I have ever wanted was a family of my own.  You have shown me that and more. Your love and friendship have made me happier then I never thought I could be.  I can’t wait to grow old with you Sam…”

Her tears were flowing freely now as they exchanged rings. 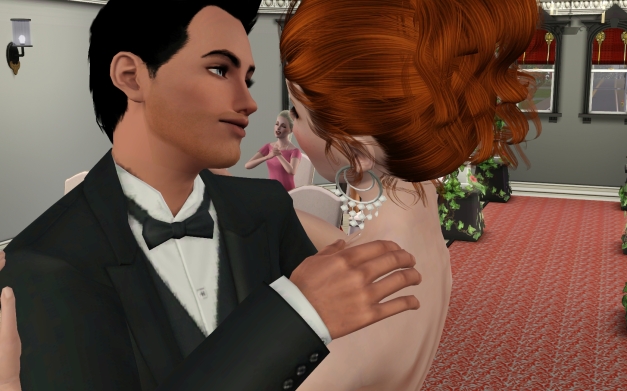 “You may now kiss the bride!” The minister said.  Lucy felt a  swell of pure love as Sam leaned in for a long lingering kiss.  She could hear their friends and co-workers clapping.  Presley even let out a loud wolf whistle.  They were now officially married.

After the ceremony Lucy greeted everyone and thanked them for coming. She officially got to meet Presley’s new girlfriend Kate.  She was a lovely girl, and Presley seemed happy.  She was happy for them.  She liked Kate and hoped it would work out between them.  He deserved to be as happy as she was.

She wished Presley all the happiness in the world.  It had took some time, but there friendship was back on the rails.  He was happy with Kate, and Lucy was more then happy with Sam.  It seemed that things were going good for the both of them.

Part of her had been nervous during the ceramony that Lobelia would show up, but she had been laying low since the night Lucy’s house exploded, not wanting to draw unwanted attention to herself.  But that was how Lobelia was.  You would let your guard down and thats when she would strike like a cobra. 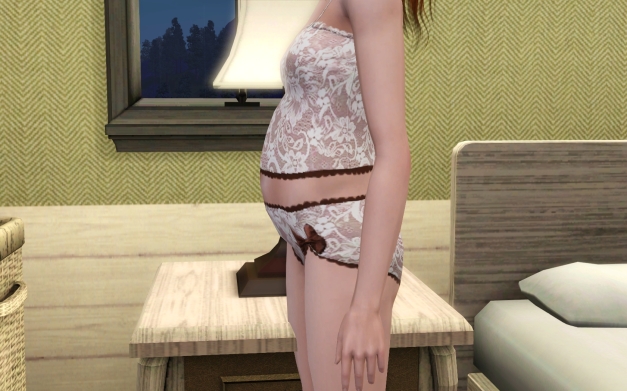 Lucy’s bump was growing fast!  She now was experiencing the dreaded waddling.  She felt like a duck.

It was almost the end of her pregnancy, and she was getting anxious to meet her son or daughter.  She was ready.

Winter hit the island hard… Lucy was officially on maternity leave.  She spent most of her days inside out of the cold, preparing for the arrival of her little one.

Out in the country the roads were terrible.  They didn’t get the same attention from the plows that the inner city did.  Lucy was stressed, irritable, and anxious.  She felt like a shut in having closed herself off from the world.  She wanted to stay home incase she went into labor not wanting to have her waters break in the super market!

All of a sudden the power flickered and the wind gusted hard against the side of the house, and with that moment she felt her waters burst.  She clutched at her stomach and felt her first contraction.  She felt like she was going to burst. She screamed from the pain!

Sam jumped around screaming and pulling out his hair like the frightened first time father he was. He normally was so calm in a crisis.  If Lucy hadn’t been in excruciating pain, she would have found this hilarious!   He ran around looking for his car keys. Found them, and ran out to start the truck.

As he looked down the road he felt his stomach sink down to his toes.  There was no way they were getting to the hospital in this weather.  The roads were impassible!  He was going to have to deliver this baby himself…

A Differences in the Family Tree Challenge Story

Where beauty is born

The Complexity Of Us

A Legacy of Misfits

"Welcome to the island of misfit toys"

Bane of My Existence

Some Questions are Better Left Unanswered...

A Sims 3 Story Of A True Diva

Sandybeachgirl's Sims Place
The Life & Times of the Willows

When evil has a pretty face.

Future of the Fae