*Warning* This chapter contains a violent seen towards the end.  If pixellated blood bothers you, then I suggest you don’t read. 🙂  I’d also like to note that in this chapter it contains 3 different points of view. Breelynn’s, Cole’s, and Shane’s. Decided to shake it up a little. 🙂

I stood looking out through the window into the darkness.  The night was still and quiet, the only sound the gentle whisper of dead leaves as they blew across the yard.  It was the night after my sisters funeral and I couldn’t sleep, which seemed to be the norm lately.  Every time I would close my eyes, it was like I was there again.  How long would I relive this nightmare in my dreams?

Padding quietly through the house I watched my children sleep.  As I stood over them watching their small chests rise and fall I was filled with love, and also sadness.  I haven’t been there for my children emotionally since Brennan’s death.  Every time I went to hold them, I would freeze.  Cole understood, he was like I was, closed off from his emotions.  The twins were too young to understand.  They would ask questions, that I wasn’t able to answer. Yet.

I was staring off into space when I heard footsteps behind me. I watched my mother walk into the living room. 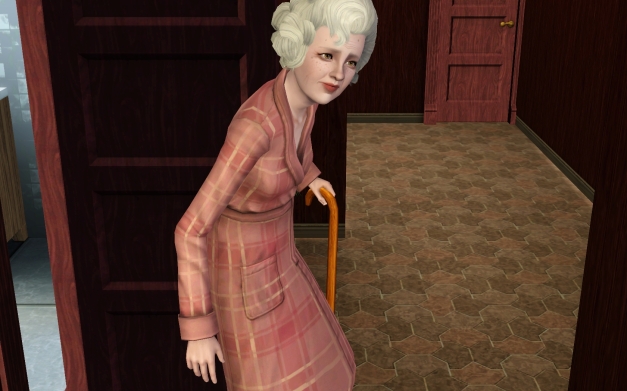 I was once again struck with how old she looked.  Brennan’s death had taken its toll on my mother as it had on us all.  I myself,  felt I had aged a hundred years.  My body constantly ached from the weight of grief that seemed to rest on my shoulders.

“What are you doing up?” She asked me, softly.  “You need to get some rest-you have school tomorrow.”

I felt sick, even though I wasn’t surprised.  My mothers episodes were becoming more and more frequent now.  She was living in the past as a way of dealing with Brennan’s death.  I would give anything to have her back! I needed my mother.

“Mom…” I whispered trying not to cry.  “Brennan’s dead. We had her funeral yesterday.”

Lucy frowned. “Funeral?” She was quiet for a long moment her brown eyes filling with tears.  She didn’t say another word.  We sat there in silence, my mother trapped in the past, and I to deal with the present and future.

I felt like If I didn’t get out of the house soon, I would explode.  I needed time to myself to think and just get away from the noise of three, almost four small children.  I found myself at the graveyard the following morning.

I shouldn’t have left the twins with my mother with the way she was, but despite her confusion she was a big help around the house and I doubt I could have made it if it wasn’t for her help with the twins. 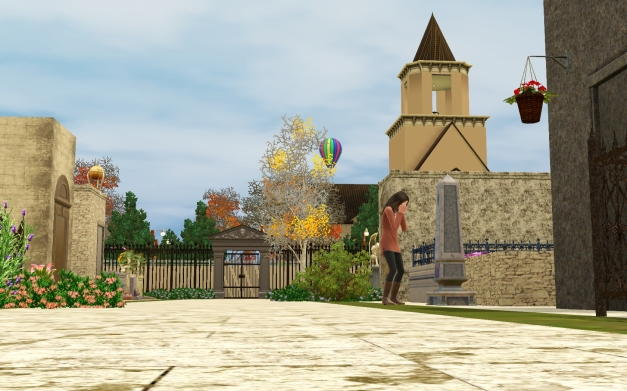 The grave yard was empty, for which I was grateful.  I approached Brennan’s headstone and gently touched the flowers I left their yesterday.

“This sucks!” I managed to get out through my tears.  “I miss you so much.” I was quiet for a long moment.  “Mom is losing it big time.   She is stuck in the past because she can’t deal with the truth.  I don’t know what to do.  If you were here you would know exactly what to do.”

I lapsed into silence and sat, enjoying the silence around me, even while my heart was heavy with grief.

My head was pounding when I got home.  Mom was tending to the twins, and I snuck past her wanting to lay down and get in a quick nap before Shane got home from work. 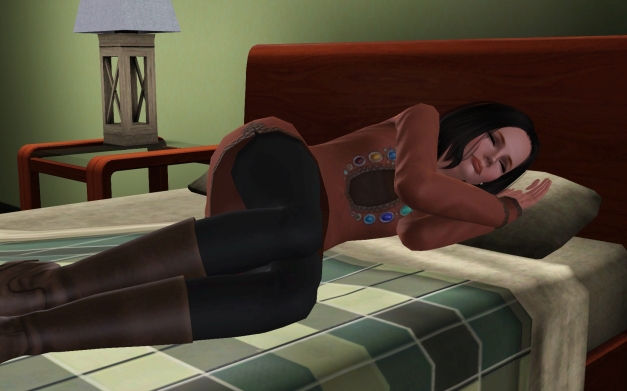 I ended up sleeping way too long. It was dark outside when I opened my eyes and the house was silent. 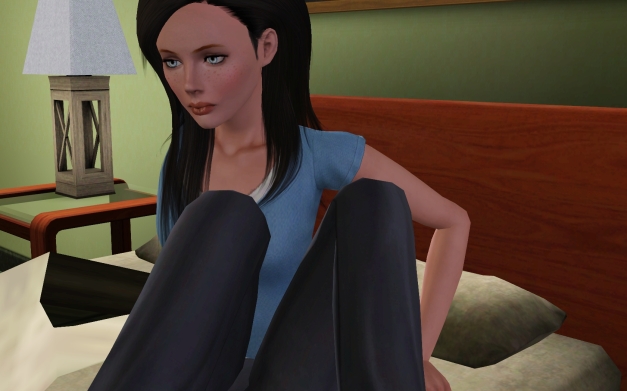 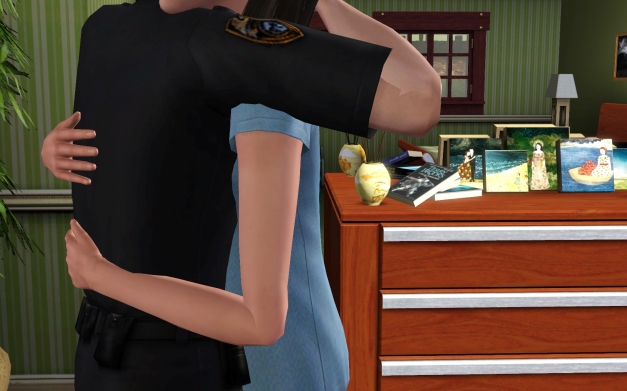 The bedroom door opened softly and Shane stepped in closing the door softly behind him.  I jumped up and ran toward him and hugged him tightly, relieved he was home safe.

He dropped his hands to my swollen belly and looked into my eyes.

“I hate the fact that I have to worry so much.” I said trying not to cry.  He didn’t need guilt tears.

“I know you worry, but everything is fine. I’m safe.  I will always come home to you and the kids.” His green eyes stared directly into mine.

We got into our pajamas and crawled into bed.

“Well we got the camera film back.”  He looked at me.  “Your sister was one smart woman, before the shooting, she was able to snap a picture of the car.  Now the picture of the driver is very hazy, and we don’t have a licence plate number, but we do have the make and model, and I’ve narrowed it down to registered owners of that vehicle type.  Everyone came up clean, except one.  And he has known ties to Nino Shapiro.” He smiled grimly.  “We are getting closer to nailing that bastard to the wall!”

“So can’t you just arrest him then?” I asked feeling hope blossom in my chest.

“We can’t find him.” He looked down.  “But we will.” Shane’s eyes flashed coldly.

I hate math.  I frowned staring down at my homework.  I stared at the numbers on the paper until my eyes started to burn making the numbers blurry.   The shuffle sound of Grandma’s slippers on the floor snapped me out of my trance.  She sat down next to me.

“Hey grandma, how good are you at math?” I asked hopefully.

“Oh Aaron.” She laughed looking at my paper.  “I’ll be happy to help you with your homework before school.”

I looked down uncomfortably as I started to fidget in my chair.  Grandma was always calling me other names.  Uncle Aaron her son, or Sam, my dead grandfather.  She even called me Milo a few times which really irritated me considering he was in jail for kidnapping me when I was younger!

“Are your sisters up yet Aaron? She asked me.  “I hope Breelynn didn’t stay out with that Milo.  I worry about her with him you know.”  Her voice trailed off

I tapped my foot against my chair in irritation.  I jumped up and shoved my notebook and pencil into my backpack that was slung over the chair.  I didn’t care if it was finished, or if I’d get another incomplete in math.  Besides, who would even care? It’s not like my mother even acknowledged my existence anymore!  I just wanted to be away from this!

“See ya later grandma!” I yelled and ran out the back door.

Outside I leaned against the siding and tried not to cry.  I was just a boy but everything else was falling apart around me, and I had to stay strong!   My aunt was dead, my grandma was going insane, my step dad was always working, and my mom was but a ghost of herself.   My grades were even worse now, but nobody seemed to care.

Jake the family pet came running up and barked at me.  He wagged his stub of a tail and crouched down low with his front paws splayed out in front of him wanting to play!  It was like he too had been feeling neglected lately.  I dropped to my knees and hugged him, my head resting in his soft fur.  Only then did I let myself cry….

I stared at the cork poster board in my office and sighed, rubbing the bridge of my nose to stem off my headache that was just starting to form.  Ever since the death of my sister-in-law I’ve been feeling the heat to catch the asshole who did this.  Every time I went home and saw my wife’s sad eyes I was filled with so much guilt I thought I might go mad. 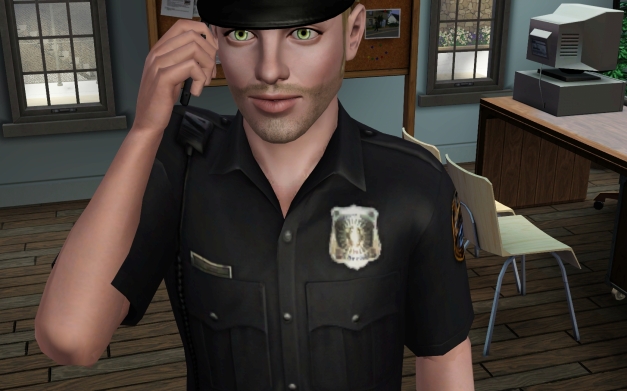 I was thumbing idly through the case folder when the phone rang.  It was my boss and he wanted me to check out a possible drug deal at the old mill on the outskirts of time.  I was furious, I didn’t have time to go snooping around a possible drug deal when there was a murderer on the loose! 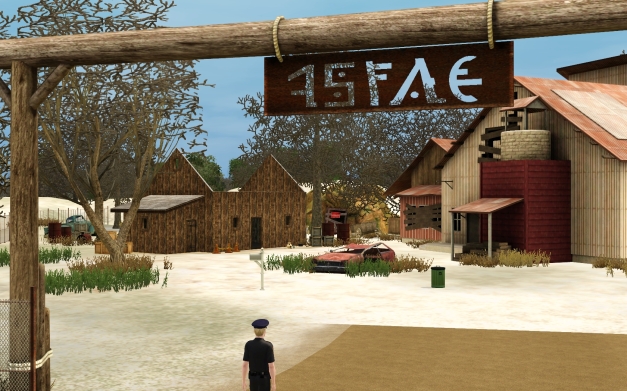 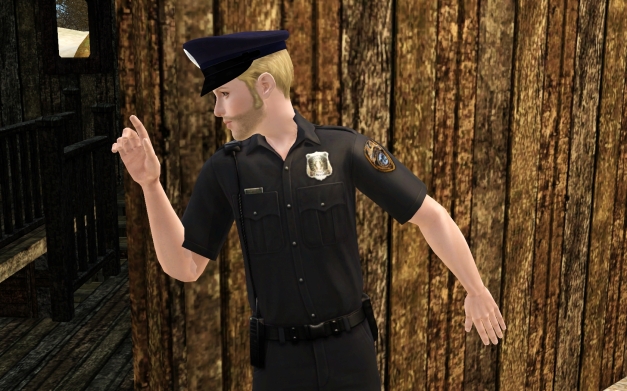 When I got to the mill there wasn’t a car or person in sight, just the old wooden building and mill that hadn’t been used in years and looked like it could fall apart at any moment.  I decided to be thorough, and check around despite my doubts.

I was quiet and light on my feet as I walked towards the wooden shack.  I paused when I heard voices come from inside.  With my back pressed tight to the rough wood I snuck a glance over my shoulder.

My blood pressure and heart rate spiked when I saw Nino Shapiro, and Max Mickelson, who was the suspected shooter based on vehicle records!

The blood was pounding in my ears and I felt a rush of adrenaline! This could get dirty fast, I drew my gun and yelled “Freeze!” 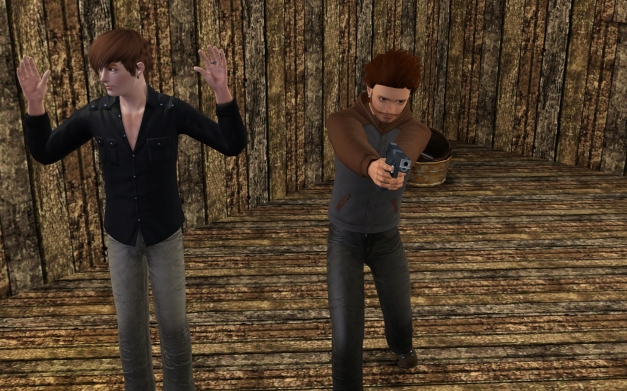 Max held up his hands, while Nino was quicker and pointed his gun at me firing a shot before I noticed he even had a gun. 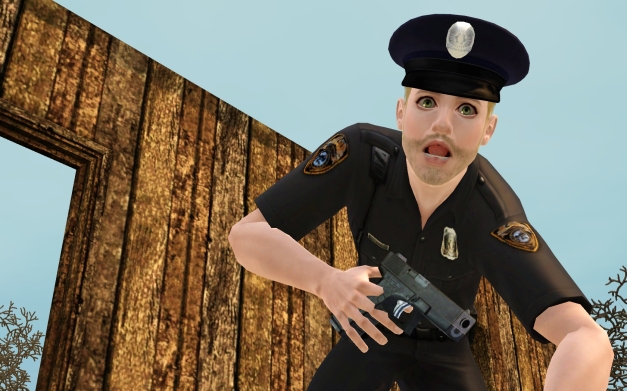 I rolled out-of-the-way tumbling into the dirt and landing on my hands and knees.  I was lucky.  The bullet just grazed my side and tore my uniform. 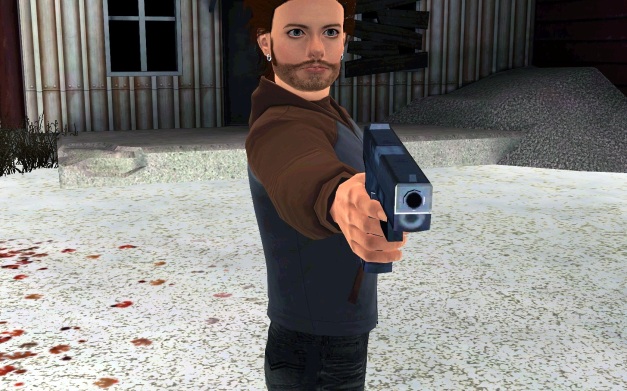 Nino stepped out into the fading afternoon, his gun aimed directly at my head.  I stared at the barrel, and knew that my life could easily come to an end tonight! 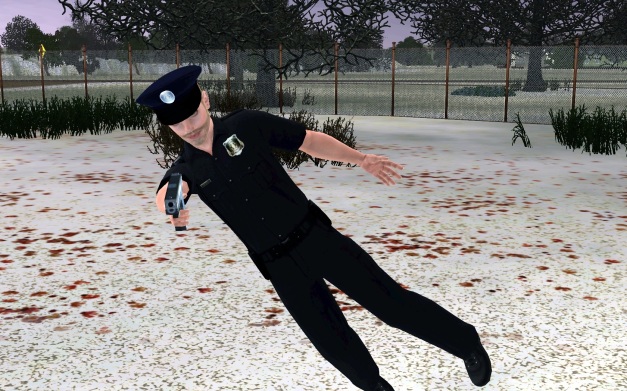 I would not put this family through another funeral!  I was going to be there for the birth of my new baby!

I picked up a small rock and chucked it at Nino.  I had great aim, and it hit him square in the middle of the forehead.  While I threw the rock, I jumped sideways my gun drawn and fired a shot hoping the bullet would find its mark!

At the same time I fired so did Nino as he also dove out-of-the-way of the bullet.  His bullet grazed my ear, but Nino wasn’t as lucky.

He laid on his side in the frost and dirt clutching his side.  His face was pale, the color of dirty snow, and I could tell from the blood loss that he had a mortal wound. 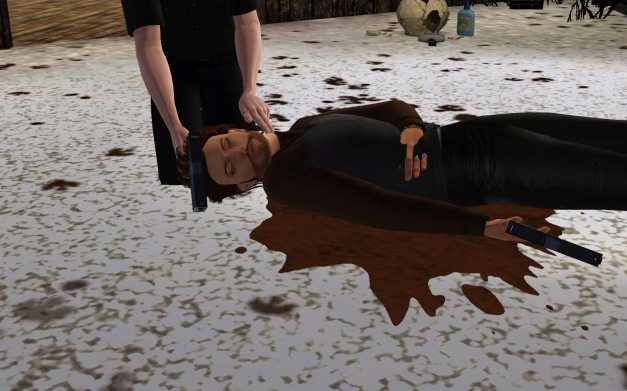 I radioed for backup and watched Nino bleed out, the red of his blood contrasting against the stark ground frost.  As the sirens blared in the distance I held a finger to his carotid artery on his neck to check for a pulse.

I sat numbly in the dirt, the frost melting and seeping into the fabric of my pants giving me the chills.

Max had run off when guns were drawn, and I knew he couldn’t be far. He would be picked up and booked for Brennan’s murder, and this nightmare would soon end!

A Differences in the Family Tree Challenge Story

Where beauty is born

The Complexity Of Us

A Legacy of Misfits

"Welcome to the island of misfit toys"

Bane of My Existence

Some Questions are Better Left Unanswered...

A Sims 3 Story Of A True Diva

Sandybeachgirl's Sims Place
The Life & Times of the Willows

When evil has a pretty face.

Future of the Fae